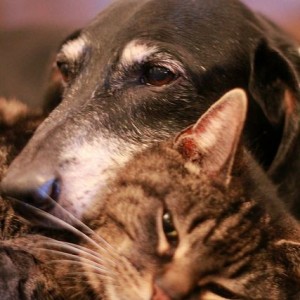 Getting ready to meet the woman I was admitting to the hospice program, I was cautioned that her animals were very bonded to her.  To gain access to her I must first gain the trust and then permission of her dog and cat, who were also in the twilight of their years.

The dog was lying by the entrance to her room, and I was quickly greeted by a wagging tail and contented grunt as I scratched his ears while murmuring what a wonderful dog he was to love and protect his mistress.  I then proceeded into the room.

The very large cat sat on the lid of the bedside commode, positioned next to the bed in which the frail woman lay.  I sat down in front of the cat and put out my hand, also acknowledging what a wonderful companion she has been.  She eyed me up and down and once satisfied I was no threat, reach out her paw to gently touch my hand.  It felt like I was being anointed.  I nodded to the cat and assessed her beloved owner.  At the end, I again nodded to the cat and this time thanked her for being such an attentive pet and I was allowed to give her a neck rub.  But only for a minute and then I was motioned away her her standing up and pointing towards the door.  The dog then walked me from the door to the waiting family.

In addition to talking about what to expect in the ensuing final days to weeks, we also talked about the animals and their need for closure and to grieve.  Since I was only the admitting nurse I did not see them again.   A month later,  while waiting in the hospital hallway for another family member who was in surgery, the daughter noticed me  quickly ran up and pulled me aside.

She excitedly told me how grateful she was we had talked about the need of the animals. Her mother had died peacefully a week prior and while the family gathered and cried together, the cat jumped on the bed.  She said, “I was about to push her off, but I remembered what you said.  Instead I watched.”  She described how the cat slowly walked over the the face of her deceased mistress and gazed into it for some moments.  She gently patted her faced twice and jumped down.  It was good bye. Recognizing the need of her beloved pets, the  the family then picked up the dog and placed him on the bed.  He also examined his mistress, licked her hand, and jumped off.  The dog and cat huddled together while the family did the same.

Per my recommendation, they kept an article of her clothing, her nightgown, on which the animals slept  for several days. It was on that nightgown that the cat died peacefully 3 days later.  I was told the aging dog was still curling  up on it.  The family reached out to each other, 2-footeds and 4- footeds alike,  both grateful and comforted in sharing their loss.

Grief is a family affair. 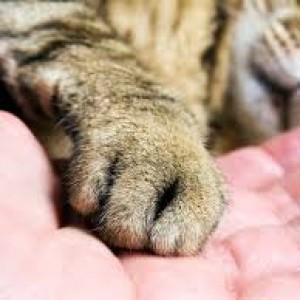